Those of us with a Catholic upbringing (or any familiar with the prayers of the Catholic Church) will be familiar with the "Hail Mary." Known officially as "The Hail Mary," it is one of the (if not the) most offered prayers in Catholicism. In the saying of the Five-Decade Rosary, the prayer is repeated over 50 times. 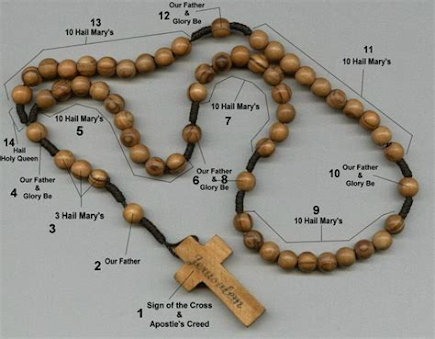 The text of the prayer is made up a first half carved from scripture (Luke 1:28) and the second half was codified by the RCC in AD1568 as one of the responses of the RCC to the Reformation. It was informally used for several centuries before that, but as with the canonization of the Apocrypha, it found itself becoming "official" in the counter-reformation.

Hail, thou that art highly favoured, the Lord is with thee: blessed art thou among women.
-KJV

Hail, full of grace, the Lord is with thee: blessed art thou among women.
-Douay-Rheims (1899)

The Greek word here is "charitóō." Strong's defines it thusly:

to grace, that is, indue with special honor: - make accepted, be highly favoured.

"Special Honor" and "be highly favored." Wonderful! But let us not miss "make accepted."
Mounce defines it this way:

to give graciously, to show acts of kindness by freely giving; (n.) one highly favored

We note that "freely giving." This explains why such a one is "highly favored." It is not internally true. It is a bestowed honor in this context.
Thayer defines it:

This Greek word, "charitóō," is used by the Holy Spirit in one other instance in the Greek text of scripture.
Ephesians 1:6

To the praise of the glory of his grace, wherein he hath made us accepted in the beloved.
-KJV


Unto the praise of the glory of his grace, in which he hath graced us in his beloved son.
-DR 1899

As with Mary, we are graced from the outside. We are the recipients of honor we do not deserve. Note in Ephesians the praise is for "the glory of his grace." Incredible! His grace surely is glorious! How blessed are we? Blessed beyond measure. Those of us in the One Body are blessed with "unsearchable riches" in the far above the heavens!

To me, who am less than the least of all the saints, this grace was given, that I should preach among the Gentiles the unsearchable riches of Christ, and to make all see what is the fellowship of the mystery, which from the beginning of the ages has been hidden in God who created all things through Jesus Christ...

The great apostle Paul takes his place as "less than the least of all the saints." He recognizes the grace given him, an undeserved grace. A grace we all need. A grace we are dependent upon for our hope of resurrection life in the ages to come.

We turn back to Mary and look at her example as well.

Then Mary said, “Behold the maidservant of the Lord! Let it be to me according to your word.” And the angel departed from her.

The word translated "maidservant" here is the Greek word "doúlē." It was used to refer to a female slave or female servant. One who had no rights. Neither Mary nor Paul claimed anything before the Lord. Both understood they were highly graced, blessed beyond measure by a gracious and loving God!

That is the example we need to take from these saints of God. As saints ourselves, we should never forget all our blessings and our hope of life to come is purely by grace alone through faith alone in the death, burial, lack of decay, and resurrection of the Savior, the Holy One of Israel, the Lord Jesus Christ!
As to the ending of the Catholic prayer ("pray for us now and at the hour of our death"), we must reject. It is a negation of the grace of God. These words are not found in scripture and surely Mary would have no thought of such a thing.

“My soul magnifies the Lord,
And my spirit has rejoiced in God my Savior.
For He has regarded the lowly state of His maidservant;
For behold, henceforth all generations will call me blessed.

God, Mary's Savior. Yes, we call her blessed. Such an honor to bear her own Savior and the Savior of the world!  Mary took her place as God's servant, Paul was faithful to his calling to bring the truth of the Mystery of the current dispensation to us Gentiles. Let us be thankful for their faithfulness and, along with them, give all glory to our Savior and the author of Life eternal, the Lord Jesus Christ!