Another guy I like, Doug Woodward, has the following chart in his book which is intended to show that the Jews corrupted the Hebrew text to hide the truth that the Gentiles would trust in the Messiah. The evidence for this particular charge is based on Isaiah 42:4. 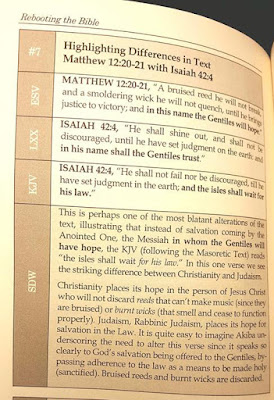 The man who posted the page on Doug's Facebook page noted that the ESV is taken 90% from the Septuagint (LXX) and is thus a superior version as the KJV is taken from the "corrupt" Masoretic text.


The chart suposedly reveals the "corruption" in Isaiah 42:4, noting that the passage in Matthew lines up better with the Septuagint. What is missing from the chart is the ESV translation which looks amazingly similar to the KJV.


Just a cursory look at the use of "isles" and it's clear this is a reference to the nations/Gentiles as Matthew clarifies.

And the ESV regularly uses "coastlands."


That's better? The KJV here, at least, uses "shall trust" instead of "wait." Isn't that the original "problem"? Well, that addresses the ESV issue (it's essentially the same as the KJV), but what about the "corrupt" Masoretic text and the "inspired" Septuagint?

Gen 10:5 introduces us to the "isles" of the nations (Gentiles). Greek "nēsos" (LXX). Read what the "waters" in Revelation 17 represent.

"The waters that you saw, where the prostitute is seated, are peoples and multitudes and nations and languages." (17:15).

(I leave a caveat here only because I have never broken down that verse, but in any case "waters" is used figuratively of people.)

Another Psalm of the Messiah's reign is Ps 72 wherein we see the "isles" ("coastlands" ESV) representing the nations/gentiles. God obviously inspired figurative language as we see "isles" and "waters" used in both OT and NT for "nations" (gentiles). The ESV consistently uses "coastlands."

May the kings of Tarshish and of the coastlands render him tribute;
may the kings of Sheba and Seba bring gifts!
May all kings fall down before him,
all nations serve him! (ESV)


I'm not seeing where the ESV or the LXX is somehow better (and I'm not a huge fan of the KJV)?

Granted, I have not seen the whole chart or book, but the chart in the picture is somewhat misleading. The poster boasts of the ESV, but it uses the same language as the KJV (and in the case of Isaiah 51 it's worse).

Be Careful with the Septuagint


I realize the KJV has its issues (and many translations use "isles" or "coastlands"), but the Septuagint contains the Apocrypha (and its heresies). The Hebrew Canon excludes those books. The Septuagint is useful for helping us understand some Greek words as they may be used in the NT, but it's not superior to the Hebrew texts, in my opinion.

(I want to be careful here, I am not dismissing all of the Septuagint, it is a very valuable and essentially reliable western, Greek text.)

"Isles" in scripture is a reference to the Gentiles, clarified in the Greek NT. Isaiah 11, the great chapter on Israel's kingdom, gives us the same word and its sense in the Hebrew. Here it is in the NKJV (vs. 11-12):

It shall come to pass in that day
That the Lord shall set His hand again the second time
To recover the remnant of His people who are left,
From Assyria and Egypt,
From Pathros and Cush,
From Elam and Shinar,
From Hamath and the ISLANDS of the SEA.
He will set up a banner for the NATIONS,
And will assemble the outcasts of Israel,
And gather together the dispersed of Judah
From the four corners of the earth.


The blessings of Gentiles through Israel was known since Abraham. "And in you all the families of the earth shall be blessed" (NKJV). This truth goes far beyond Is 42. If they wanted to hide it, they did a terrible job. Jewish commentators have, of course, tried to attack the prophetic credentials of the true Christ, but if they thought they could erase the evidence for Him or somehow deny blessings of the Gentiles, they'd have to destroy the Textus Receptus in toto.

A more egregious error has been made by Christendom in failing to separate the place of Jews and Gentiles in the Acts Age from the One New Man in the current, Post-Acts Age.

To sum: I don't think Isaiah 42:4 is corrupted in the Hebrew. The sea (coast-lands, nations just beyond Israel) is often a picture of the nations (gentiles) in both OT and NT. The Lord's ministry as given in Matthew is to Israel alone and he uses the sea to refer to the nations. I don't believe you will find any gentile from Gen 12 - Acts 28 who is blessed apart from some connection to Israel or an Israelite. The "nations" often listed are those around Israel. When Paul references Gentile blessings in that Romans 15 passage, it is in light of the "grafting in" to Israel that was going on in that age. The scriptures quoted  in Romans 15 are from 2 Sam, Psalms, Deuteronomy. All these verses refer to "Goy" in the Hebrew texts [TR].

The future blessing of the nations (gentiles) is right in the same chapter:

"I the Lord have called thee in righteousness, and will hold thine hand, and will keep thee, and give thee for a covenant of the people, for a light of the Gentiles"

It is not fully hidden nor fully obscured. What Paul does say was obscured was the understanding of Gentile blessing (see Romans 16:24-26). Do we charge God as a deceiver? Of course not. "It is the glory of God to conceal a thing: but the honor of kings is to search out a matter." -Prov 25:2

The exalting of the Septuagint over the Hebrew texts gives credence to the Apocrypha and the arguments of the Christ-denying churches in "Christendom" who take the position that it is correct and the Hebrew Canon is in error.

When the Lord lays out the breadth of the Canon, he refers to the blood of Abel to the blood of Zacharias (Mt 23). Genesis to 2 Chronicles and the captivity. The Septuagint (and the KJV from 1611-1884) include the questionable books of the Apocrypha.