Then Paul stood in the midst of Mars’ hill, and said, Ye men of Athens, I perceive that in all things ye are too superstitious. For as I passed by, and beheld your devotions, I found an altar with this inscription, TO THE UNKNOWN GOD. Whom therefore ye ignorantly worship, him declare I unto you. -Acts 17:22-23

Man is incurably religious. Even among Christians there is a groaning desire of the old nature for ritual, ordinances, holy days, etc. We have seen Romanism creeping in in places we would never imagine it happening. I was active in a Southern Baptist church when Advent candles were added to the life of the assembly. They craved ritual.

As we've noted in earlier posts on the Reformed churches, they are already dripping with Catholic leftovers from their church buildings to the structure of their services to their doctrines. But now we are seeing it even among the most conservative, dispensational Evangelical groups. Many Christians now practice Lent, for example. This is all in addition the two ordinances of Israel which are almost universally practiced by Evangelicals: Baptism and the Lord's Supper.

At the center of this movement is a failure to rightly divide and a dissatisfaction with grace. Men, in the flesh, are eager to participate in either their own salvation or in their own sanctification. As they seek to "walk worthy of the calling to which you have been called" (Eph 4) they add rituals and ordinances and holy days to take the place of studying the scripture and resting in grace.

The problem leaps out from the verse quoted. Since they reject Paul's calling of grace and do not understand that Gentiles have never been under the law, they readily grab from wherever they like in the Bible and apply it to themselves. The parables in Matthew are misapplied everywhere. Worse than that, chucrhes print catechisms and creeds putting others in bondage to shadows never meant for them.

It's a vicious circle. Rejecting the Mystery revealed to and by Paul with its hopes and blessings "in heavenly places," they cling to Jewish rituals meant for an earthly people (this includes baptism and the Lord's Supper). And as they practice these rituals, it builds up pride in the flesh which will not allow itself to rest in this dispensation of grace.

In my many debates with Catholics, I often end up running in circles and concluding that no amount of information or contradiction will sway them because, simply put, the just like being Catholic. There is a comfort and a pride in rituals. But the Catholic is not alone in his pride. many Reformed just like being Reformed. Both groups worship their own histories to the detriment of Bible study. each have their own "authorities" outside of scripture (often they are the same authorities such as Aquinas and Augustine). They even claim the same creeds.

The failure to Rightly Divide the Word of Truth leads to grabbing whatever we read without context. Which leads us to our first horror show: Kate Hanch and her articles at Baptist News Global. Her most recent article is titled, "A case for making the sign of the cross — even for us Baptists (and other Protestants)." Ex-Catholics everywhere cringe.

Ms. Hench is hardly an outlier. As we have noted, other unbiblical practices (in addition to those which are biblical, but which are meant for another age and another people) have been embraced by Christendom: Ash Wednesday, Lent, Advent, Saints, worship of angels, holy water, etc.

Further adding to the confusion and empowering of the flesh is this model, championed by the Reformed churches and seminaries, but increasingly adopted by all wings of Christendom: 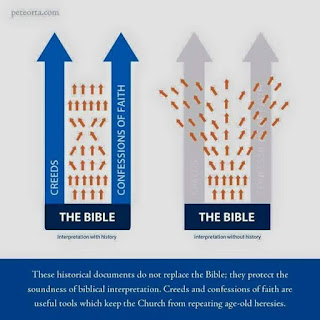 This chart is next in our theological horror hall of fame. Historically, the ones who get to write the creeds and confessions have tortured and killed the ones who wander outside of them. Imagine those who honor men like Luther, Hus, Tyndale, and  Wycliffe telling Christians it's dangerous to question the status quo! Well, it is surely dangerous in terms of this world, but if we truly want to "study to show [ourselves] approved unto God" we are necessarily going to have to discard creeds and confessions and catechisms.

"Our forefathers threw off the yoke of popery in religion: for you is reserved the honor of leveling the popery of politics. They opened the Bible to all, and maintained the capacity of every man to judge for himself religion." -Samuel Adams


If your belief system is a creed, you have no truth, you have merely adopted the belief system of another. The Holy Spirit is not your teacher, you have submitted both mind and will to a man or to men. This is the formal teaching of the Roman church. It seems no matter how far the Evangelical and Reformed churches believe they have wandered from Rome, we discover that all roads not built on a personal theology still lead to Rome.

So let no one judge you in food or in drink, or regarding a festival or a new moon or sabbaths, which are a shadow of things to come, but the substance is of Christ. Let no one cheat you of your reward, taking delight in false humility and worship of angels, intruding into those things which he has not seen, vainly puffed up by his fleshly mind, and not holding fast to the Head, from whom all the body, nourished and knit together by joints and ligaments, grows with the increase that is from God. Therefore, if you died with Christ from the basic principles of the world, why, as though living in the world, do you subject yourselves to regulations— “Do not touch, do not taste, do not handle,” which all concern things which perish with the using—according to the commandments and doctrines of men? These things indeed have an appearance of wisdom in self-imposed religion, false humility, and neglect of the body, but are of no value against the indulgence of the flesh. 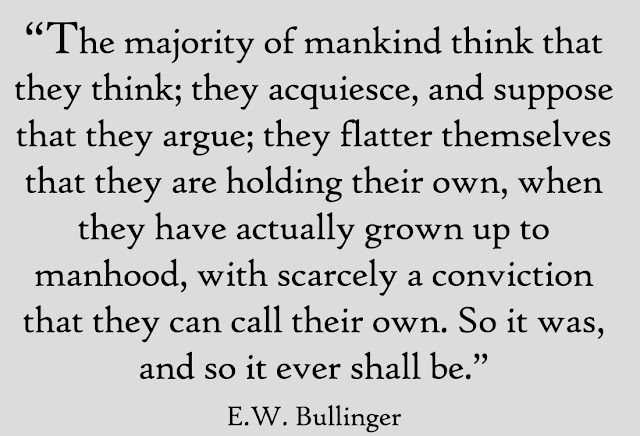 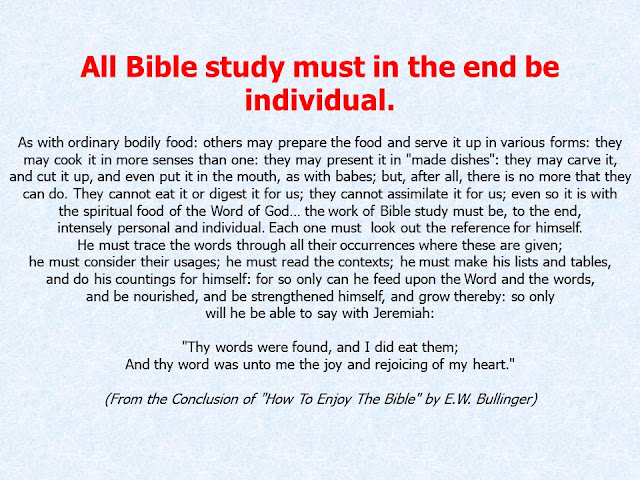