An Overview of the Plan of God


[T]here is nothing more frivolous than that common distinction of moral, judicial, and ceremonial law, which men ordinarily make use of. For no positive law whatsoever can oblige any people but those to whom it is given. “Hear, O Israel,” sufficiently restrains the obligations of the law of Moses only to that people.


A fundamental of Bible study is the understanding that the Bible has very little to say about eternity (future or past). It is a book about the "ages" and about "days." We generically know that God has no beginning and that some day all the families of God during the ages will come together. But that is about all we know.

Since God wants us to be concerned with, and limit ourselves to, these ages and days, we need to understand them. We need to rightly divide them in their contexts.

We recently looked at a book ("Who is a Jew") which does great violence to these distinctions. It takes two verses in Romans, written to Jews in the Acts Age, and attempts to apply them across ages to all believers. This is inconsistent with usage of the words in question scripture and inconsistent with the Book of Romans itself! I will leave that there as we have covered these in that 3-part study.

We must start with an aerial view of the Bible. We must see the Plan of God from above so we know where we're landing (understand the context) when we're attempting to study, understand, and apply the Word of Truth.

A first step is seeing the approximate 7 Days of scripture. The "Days" equating to roughly a thousand years each. The first two days (2000 years), there was no Israel, no written law, and the revelation of Christ was present, but not well understood. The hope was the restoration of Paradise lost in the garden. It was an earthly hope.

The next two days (2000 years) see God choosing a nation and relating to mankind via that nation as His channel. That nation is Israel. From Abraham through the Acts Age, you see all nations dealt with only as they interact or are in contact or blessed through Israel.

We are currently in the next two thousand years; the Age of the Silence of God, as he calls out a people according to the Mystery hid in God from before the ages, revealed by the Apostle Paul at the end of the Acts Age and disclosed in the Book of Ephesians. In regard to Israel, this is the "two days" of her position as "not My people" ("Lo-Ammi" Hosea 1:9) ending with her full restoration as prophesied in the the Book of Hosea (6:1-3).

The Final thousand years will be the millennium age wherein Israel is restored, the New Covenant is enacted, and the promises made to the fathers (of Israel) come to fruition. 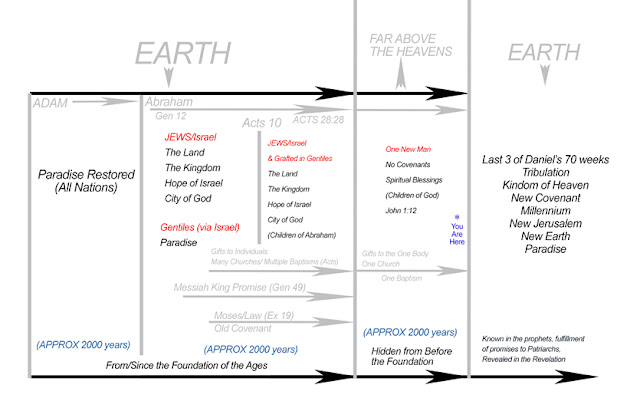 In the chart above we see the "hope" or "hopes" of the ages. Men sought the restoration of Paradise, the Abraham and Israel sought a land and a Kingdom and a Messiah, today we have "blessings in the far above the heavens" and look for the appearing of the Lord.

We note that all these ages end in failure (even the millennium).


But the Lord came down to see the city and the tower which the sons of men had built. And the Lord said, “Indeed the people are one and they all have one language, and this is what they begin to do; now nothing that they propose to do will be withheld from them. Come, let Us go down and there confuse their language, that they may not understand one another’s speech.” So the Lord scattered them abroad from there over the face of all the earth, and they ceased building the city. -Gen 11:5-8

“The Holy Spirit spoke rightly through Isaiah the prophet to our fathers, saying,

“Therefore let it be known to you that the salvation of God has been sent to the Gentiles, and they will hear it!” And when he had said these words, the Jews departed and had a great dispute among themselves. -Acts 25-28

But know this, that in the last days perilous times will come: For men will be lovers of themselves, lovers of money, boasters, proud, blasphemers, disobedient to parents, unthankful, unholy, unloving, unforgiving, slanderers, without self-control, brutal, despisers of good, traitors, headstrong, haughty, lovers of pleasure rather than lovers of God, having a form of godliness but denying its power. And from such people turn away! For of this sort are those who creep into households and make captives of gullible women loaded down with sins, led away by various lusts, always learning and never able to come to the knowledge of the truth. -2 Tim 3:1-7

When the thousand years have expired, Satan will be released from his prison and will go out to deceive the nations which are in the four corners of the earth, Gog and Magog, to gather them together to battle, whose number is as the sand of the sea. They went up on the breadth of the earth and surrounded the camp of the saints and the beloved city. And fire came down from God out of heaven and devoured them. -Rev 20:7-9


Within these ages are other lines which must be drawn. As just one example, the Law was not given to Abraham, but to Moses. That covenant laid out the conditions of the promises to Abraham, but they did not nullify those promises.


Is the law then against the promises of God? Certainly not! For if there had been a law given which could have given life, truly righteousness would have been by the law.

We are repeatedly told by Paul that God's promises to Abraham and to Israel would come to pass (Gal 3; 2; Rom 9; Rom 15). We do not enter into those promises as they are earthly, bound to a land and a Kingdom on earth. They are connected to a priesthood. A requirement is, of course, faith, but our faith is not in that hope in this age.


Blessed be the God and Father of our Lord Jesus Christ, who has blessed us with every spiritual blessing in the heavenly places in Christ, just as He chose us in Him before the foundation of the world, that we should be holy and without blame before Him in love...


As our opening quote from John Locke encourages us to make correct distinctions, so we must. The covenants and promises and adoption were never given to Gentiles (save temporarily in order to make Israel jealous as we saw in our most recent study). They were given to Israel and God's promises are yes and amen (2 Cor 1:20)!

For I could wish that I myself were accursed from Christ for my brethren, my countrymen according to the flesh, who are Israelites, to whom pertain the adoption, the glory, the covenants, the giving of the law, the service of God, and the promises; of whom are the fathers and from whom, according to the flesh, Christ came, who is over all, thee ternally blessed God. Amen. -Rom 9:4

Is that still true in this age? No. After the Acts Age ended, God revealed the plan for the next two thousand years which primarily concerned a people blessed in the heavens (not on earth) who can now come apart from Israel.


Remember that you, once Gentiles in the flesh—who are called Uncircumcision by what is called the Circumcision made in the flesh by hands—that at that time you were without Christ, being aliens from the commonwealth of Israel and strangers from the covenants of promise, having no hope and without God in the world.  But now in Christ Jesus you who once were far off have been brought near by the blood of Christ. -Eph 2:11-13

If we fail to see these changes in the temporal Plan of God, we will miss the overall Plan of God and end in confusion. We will attempt to rob from Israel her promises and forsake our own blessings which are reserved in the "far above the heavens."

Most of Christendom has forsaken Paul in this way in this age. They seek earthly gain and claim the promises of other families of God. It is not too strong to say these are dangerous and Satanic practices. And as Satan presents himself as an "angel of light" (2 Cor 11), so the religion of man presents itself as "Christian." The adoption of Israel's earthly ordinances (Lord's Supper, Baptism, priesthoods, claims of new revelation from God, etc.) is a reflection of the failure of Christendom to rightly divide the Word of Truth.

So let no one judge you in food or in drink, or regarding a festival [feast] or a new moon or sabbaths, which are a shadow of things to come, but the substance is of Christ. Let no one cheat you of your reward, taking delight in false humility and worship of angels, intruding into those things which he has not seen, vainly puffed up by his fleshly mind, and not holding fast to the Head, from whom all the body, nourished and knit together by joints and ligaments, grows with the increase that is from God. Therefore, if you died with Christ from the basic principles of the world, why, as though living in the world, do you subject yourselves to regulations— “Do not touch, do not taste, do not handle,” which all concern things which perish with the using—according to the commandments and doctrines of men? These things indeed have an appearance of wisdom in self-imposed religion, false humility, and neglect of the body, but are of no value against the indulgence of the flesh. -Col 2:16-24


God is patient. I am not condemning those in error, merely imploring them to forsake the rudiments of the world and the practices of another age and embrace the one faith, one hope, and one blessing of the current Age. We are all on a journey of faith, but if we settle into the promises of another age, we will never enter into the full blessings of our own calling.

After our apostle, Paul, reveals the Mystery of the One New Man which was hidden in God long before the ages began, he implores us to walk according to its truths.

I, therefore, the prisoner of the Lord, beseech you to walk worthy of the calling with which you were called. -Eph 4:1


We were not called to Israel's blessings on earth, we are called to spiritual blessings in the far above the heavens, in the holy of holies, where Christ sits at the right hand of God!