We Must Worship in Spirit and Truth

But the hour is coming, and now is, when the true worshipers will worship the Father in spirit and truth; for the Father is seeking such to worship Him.- John 4:23

"Spirit" refers to that which originates with God. The breath of life is given by God and taken by God. The Lord on the cross cried out "into your hands, I commend my spirit" and he "gave up the spirit" as he "breathed his last." (As God, the Lord Jesus willingly gave the life that no man could take from him.)

The spirit is distinguished in scripture from our flesh (our outward tent) and from who we are (our soul). Adam, for example was created from dust (flesh). He became a "living soul" when the breath of life (the spirit which originated with God) was breathed into him. Taking a step back, that means that a soul can be "not living." Scripture tells us, "the soul that sins, it [he] shall die." We'll have to leave that there and cover it in a separate post.

So to worship in Spirit, we must do it from that which is created as a direct creation by God. In this sense angles are called "spirits." That is, we cannot worship him in the flesh. Self-flagellation, penance, etc. these are works of the flesh and God has no use for them as forms of worship. We must walk in the "new man." We are born into a decaying tent with a fallen nature. In Christ we have a new nature and we are a new creation.

Put off, concerning your former conduct, the old man which grows corrupt according to the deceitful lusts, and be renewed in the spirit of your mind, and that you put on the new man which was created according to God, in true righteousness and holiness. -Eph 4

Therefore, if anyone is in Christ, he is a new creation; old things have passed away; behold, all things have become new. - 2 Cor 5

We must come into the light, walk worthy of our new calling and walk according to the spirit (Ephesians).

Worshiping in spirit may seem at first glance the more complicated of the two requirements, but I believe it is worshiping in truth that seems to elude us in this age.

There are some obvious things about worshiping in truth that I am not going to address. We must know who God is. We must know what he's done for us. We must know and obey the gospel of the free grace of God. But often in our day we see things that look like truth, sound like truth, have language that appears as truth... but the worship is rejected by God as not according to truth.

And Aaron said to them, “Break off the golden earrings which are in the ears of your wives, your sons, and your daughters, and bring them to me.” So all the people broke off the golden earrings which were in their ears, and brought them to Aaron. And he received the gold from their hand, and he fashioned it with an engraving tool, and made a molded calf. Then they said, “This is your god, O Israel, that brought you out of the land of Egypt!” So when Aaron saw it, he built an altar before it. And Aaron made a proclamation and said, “Tomorrow is a feast to the Lord.” Then they rose early on the next day, offered burnt offerings, and brought peace offerings; and the people sat down to eat and drink, and rose up to play. - Exodus 32

Look at Aaron and the Israelites here in Exodus 32. Here, a redeemed people, with a chosen leader, want to worship Elohim and YHWH (Jehovah). They have the right names. They proclaim correctly what he did (brought them out of the land of Egypt). They even built an altar. We immediately see that much of their activity is done in the flesh (engraving, molding, eating, drinking, playing) and not in the spirit. It appears "religious" (a golden calf), but God is not impressed with man's religion, he wants truth. They sacrificed, they engraved, they molded... all in the name of the true God. But he never asked them to do any of those things.

In our day, many do things in the name of the true God, but not according to his instruction. They may even follow patterns in scripture, but many of these patterns were never given to them. We don't sacrifice sheep despite the commands along those lines. We don't circumcise. We don't follow Sabbaths (plural). We don't got to the Temple, etc. To do these things would be to try and worship according to another's truth.

So there is truth that is stated as always true (e.g. God is one) and there are truths that are particular to one group but not another (e.g. Passover). We must worship according to everlasting truths and according to the truths given to us.

It may be beautiful. It may be religious. It may stir feelings of worship. It may use the right names and attributes of God. It may even be found in the pages of scripture, but if it is not in line with both everlasting truth and particular truth, it is not worship.

All of scripture is FOR us, but not all scripture is TO us. So if you come across a command to build an ark, don't feel obligated.

For true worship we must have a new nature (given as a free gift by God), we must be walking in that new nature, we must know eternal truth and we must practice truths particular to us. We are imperfect beings (and God knows we are but dust), but to truly worship him, we must seek to follow these guidelines as closely as possible in these bodies of death.

Golden Calf Redux
Let us worship in our new nature (in spirit) and in the way he has prescribed for us in the age in which we live.

For this reason I, Paul, the prisoner of Christ Jesus for you Gentiles— if indeed you have heard of the dispensation of the grace of God which was given to me for you, how that by revelation He made known to me the mystery (as I have briefly written already, by which, when you read, you may understand my knowledge in the mystery of Christ), which in other ages was not made known to the sons of men, as it has now been revealed by the Spirit to His holy apostles and prophets: that the Gentiles should be fellow heirs, of the same body, and partakers of His promise in Christ through the gospel... -Ephesians 3


So let no one judge you in food or in drink, or regarding a festival or a new moon or sabbaths, which are a shadow of things to come, but the substance is of Christ... Therefore, if you died with Christ from the basic principles of the world, why, as though living in the world, do you subject yourselves to ordinances—“Do not touch, do not taste, do not handle,” which all concern things which perish with the using—according to the commandments and doctrines of men? These things indeed have an appearance of wisdom in self-imposed religion,false humility, and neglect of the body, but are of no value against the indulgence of the flesh. -Colossians 2 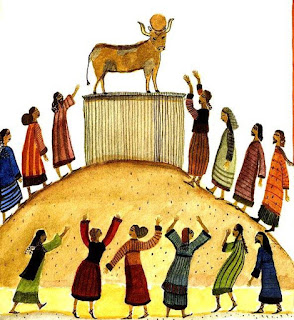