I believe we have sufficiently covered the underlying error in Dr. Jones' argument as to believing Gentiles being the "true Jews." It is not merely an error, in my opinion, it is a gross error which fails to rightly divide both the current age and the plan of God for Physical Israel.

Let us take one last look at Dr. Jone's assertion:

The Church and Judah are the same entity. Although there are non-Judahites who have been grafted into this Judah Church, the Church itself is the legitimate tribe of Judah. The Apostle Paul makes this very clear in Rom. 2:28, 29,

Here is Paul’s definition of a Jew, and he defines it both negatively and positively. He tells us that there are two groups of people, each laying claim to being a Jew (Judean). The bad figs are “apparent” Jews (The Concordant Version), for they were recognized by men as Jews.


We covered this in our first post on this book, but I want to emphasize again the danger of building an entire doctrine on a small passage without establishing it as consistent  truth. It must be consistent with the witness of scripture, the age it is given, and to the audience to which it is addressed.

Claiming Gentiles are somehow Jews is nowhere seen in scripture. We actually see the opposite. We do see that Gentiles, in the Acts Age, were grafted into Israel, but they never were called Jews. Never. And they did not lose their identity. They remained Gentiles. They were separate from Jewish believers (the real "true Jews" of Romans) from the beginning. In Acts 15, they are treated as different. In Galatians they remained Gentiles. In Romans itself, in the very chapter of the grafting in (Rom 11), Gentiles maintain a separate identity from the root, true Israel.


There are no "hidden" Jews. After the writing of the epistle to the Romans, Paul writes to the Ephesians that Paul is a prisoner for "you Gentiles." At no time are Gentiles ever said to be "Judah." This is even more problematic when we get to the listing of the tribes in the Revelation. But even long before that, James (an apostle to the Circumcision) writes, very specifically, "to the twelve tribes scattered abroad." These are the "believing Jews," the "true Jews," the "Israel of God" of scripture.


Gentile believers are not "the legitimate tribe of Judah." That is a blasphemy and falls dangerously close to the warning for those who "say they are Jews and are not," from the revelation. You will find no Gentile being called a member of the tribe of Judah, but we do see all of Israel being called "Jews." If we accept that "Jew" is derived from "Judah," that helps us none. In the two kingdoms (Israel and Judah), all were Israel.


Israel was united at the dedication of the second temple. The Book of Ezra (which needs to be read as a whole) states in part:

Now the temple was finished on the third day of the month of Adar, which was in the sixth year of the reign of King Darius. Then the children of Israel, the priests and the Levites and the rest of the descendants of the captivity, celebrated the dedication of this house of God with joy. And they offered sacrifices at the dedication of this house of God, one hundred bulls, two hundred rams, four hundred lambs, and as a sin offering for all Israel twelve male goats, according to the number of the tribes of Israel. They assigned the priests to their divisions and the Levites to their divisions, over the service of God in Jerusalem, as it is written in the Book of Moses. And the descendants of the captivity kept the Passover on the fourteenth day of the first month. For the priests and the Levites had purified themselves; all of them were ritually clean. And they slaughtered the Passover lambs for all the descendants of the captivity, for their brethren the priests, and for themselves. Then the children of Israel who had returned from the captivity ate together with all who had separated themselves from the filth of the nations of the land in order to seek the Lord God of Israel. -Ezra 6:15-21


There are no "lost tribes."Chapter 8 states "all Israel were present." And we have this detail as well:

The children of those who had been carried away captive, who had come from the captivity, offered burnt offerings to the God of Israel: twelve bulls for all Israel, ninety-six rams, seventy-seven lambs, and twelve male goats as a sin offering. All this was a burnt offering to the Lord. -Ezra 8:35

Moving to the coming of the Lord, we see Anna:


Now there was one, Anna, a prophetess, the daughter of Phanuel, of the tribe of Asher.

Was Anna not a Jew?

In the same chapter, Simeon states what had been clearly seen in Moses and the Prophets:

“Lord, now You are letting Your servant depart in peace,
According to Your word;
For my eyes have seen Your salvation
Which You have prepared before the face of all peoples,
A light to bring revelation to the Gentiles,
And the glory of Your people Israel.”

We again turn to the "grafting in" passage in Romans 11, central to Dr. Jones' assertions. Th entire chapter is necessary here. It is abundantly clear that Gentiles remained Gentiles. It is abundantly clear that while not all Jews believed, they had been blinded only "in part," and God's redemptive plan and covenants were still here. We must not rob Israel of these. It is a wickedness and a blasphemy to claim Israel's promises.

Concerning the gospel they are enemies for your sake, but concerning the election they are beloved for the sake of the fathers. For the gifts and the calling of God are irrevocable. For as you were once disobedient to God, yet have now obtained mercy through their disobedience, even so these also have now been disobedient, that through the mercy shown you they also may obtain mercy. For God has committed them all to disobedience, that He might have mercy on all. -Rom 11:28-32


In that age, while unbelieving Jews were "enemies" of believing Gentiles, they were still "beloved for the sake of the [Jewish] fathers." God's promises to the nations are not transferable, they are irrevocable. The nation will have their land. They will have their New Covenant. It has not been transferred.

For a temporary period (long ended), in order to reach the people of promise, God "grafted in" Gentiles who forever remained Gentiles.

Paul warns that is gross wickedness for Gentiles to become haughty and try to deny Jews their promises.


For I speak to you Gentiles; inasmuch as I am an apostle to the Gentiles... do not boast against the branches. But if you do boast, remember that you do not support the root, but the root supports you. You [Gentiles] will say then, “Branches were broken off that I might be grafted in.” Well said. Because of unbelief they were broken off, and you stand by faith. Do not be haughty, but fear. For if God did not spare the natural branches [Jews], He may not spare you [Gentiles] either. Therefore consider the goodness and severity of God: on those who fell, severity; but toward you, goodness, if you continue in His goodness. Otherwise you also will be cut off. And they also, if they do not continue in unbelief, will be grafted in, for God is able to graft them in again. For if you were cut out of the olive tree which is wild by nature, and were grafted contrary to nature into a cultivated olive tree, how much more will these, who are natural branches, be grafted into their own olive tree? For I do not desire, brethren, that you should be ignorant of this mystery, lest you should be wise in your own opinion, that blindness in part has happened to Israel until the fullness of the Gentiles has come in. And so all Israel will be saved, as it is written:


“The Deliverer will come out of Zion,
And He will turn away ungodliness from Jacob;
For this is My covenant with them,
When I take away their sins.”

The Old Covenant was broken and no longer had force in the Divine Court. Those who adhered to the Old Covenant by means of outward circumcision were depending upon an obsolete, conditional Covenant that had been broken and abolished. The only way to have a Covenant relationship with God was through the New Covenant, whose sign was the inner circumcision.

When He said, A new covenant, He has made the first obsolete. But whatever is becoming obsolete and growing old is ready to disappear.


He does not read his own reference. He states "The Old Covenant... no longer had force in the Divine Court," then quotes the verse which teaches that the Old Covenant had not yet gone away. In Acts 15 and Acts 21, the Jews, including the Apostle Paul, were still under the Law. In Acts 28, Paul says to the Jews in Rome that he was in chains "for the hope of Israel."

We have covered the New Covenant previously in this study and in other posts. Suffice it to say, when one reads the New Covenant (in Hebrews or in Jeremiah) is should be abundantly clear it not yet here, it is specific to Israel and her land, it is given to "virgin Israel," and it has nothing to do with blessings in the heavenlies. It is earthly covenant with an earthly hope. Grafted in Gentiles of the Acts Age could look forward to enjoying its blessings, but we have no such hope in this age.

We are believing Gentiles with out hope in the far above the heavens (Eph). We look for His appearing and to be taken to heavenly places where Christ sits on the right hand of God. Israel is waiting for the restoration of the Kingdom in the land promised to Israel. This pertains to all twelve tribes. When we fail to rightly divide the Word of Truth, we end up in confusion. 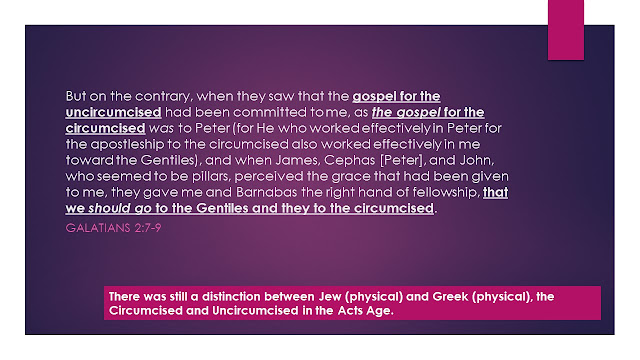 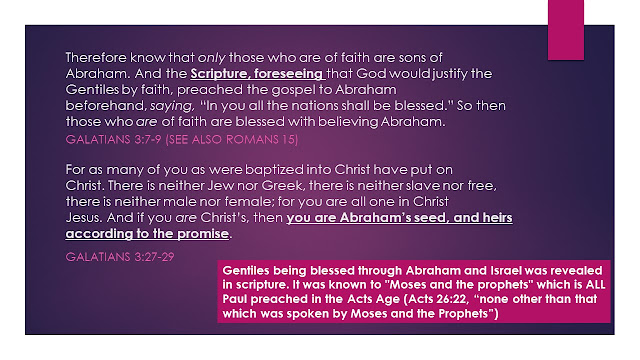 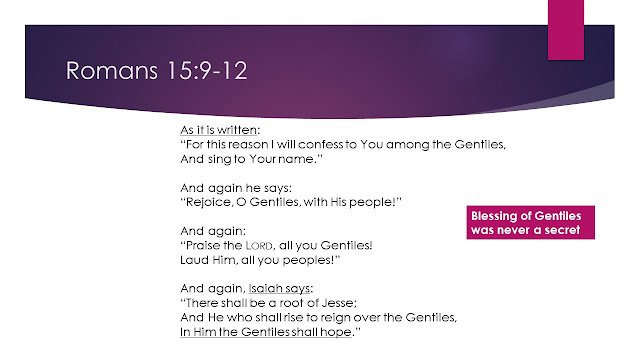 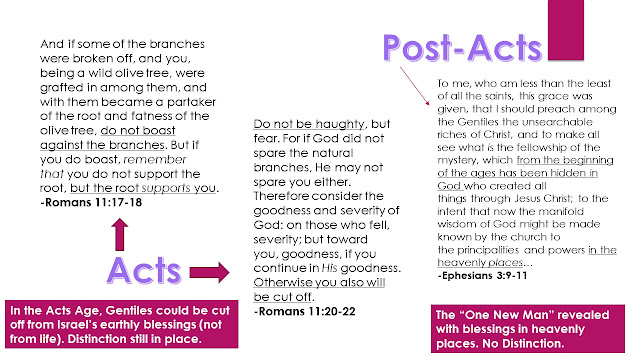 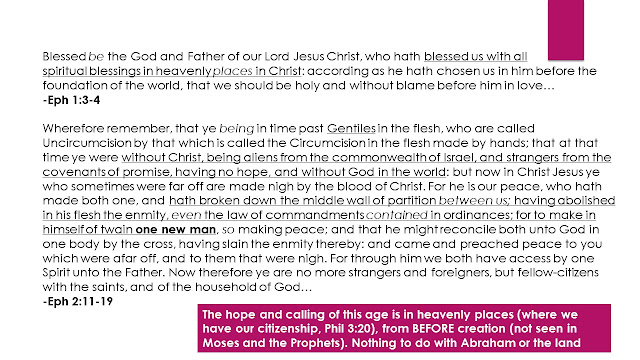 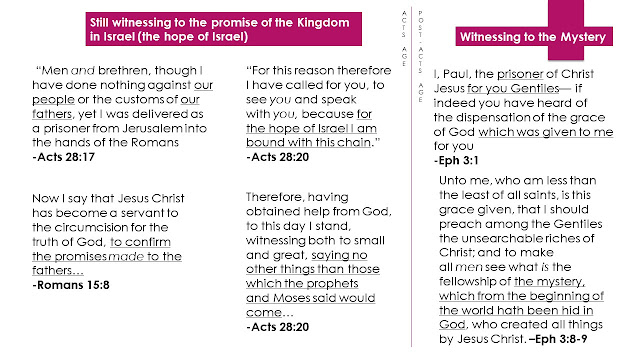 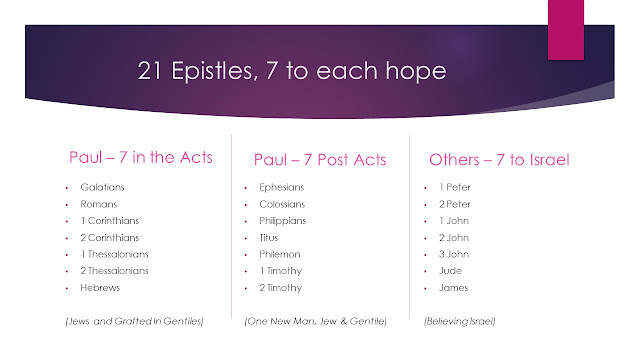 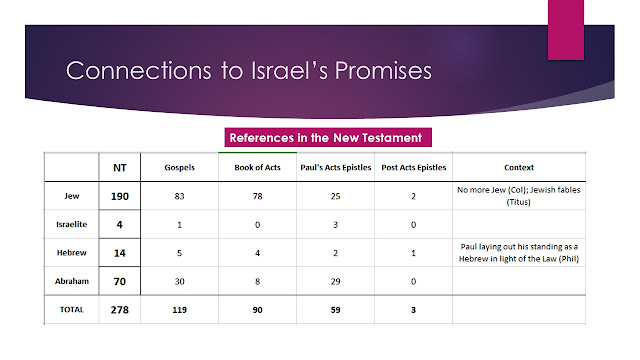 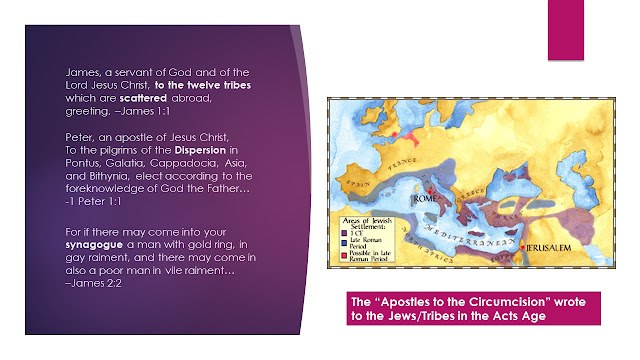 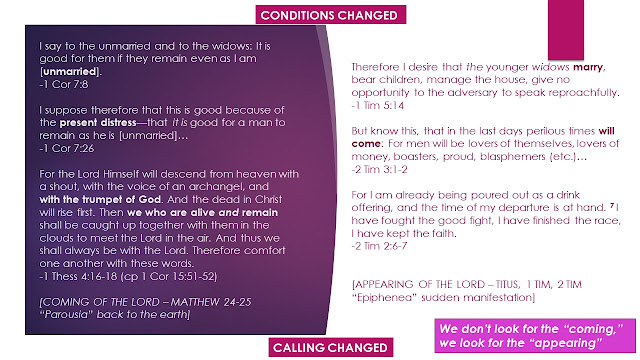